In Part 2 of Likutey Moharan, Lesson 67, he writes:

A little later on in that same lesson, Rebbe Nachman explains that:

“Fires are caused in the world on account of the names of these ignominiously renowned people becoming great and enhanced, for this causes God’s name to disappear, the luminaries of light to be subdued, and the luminaries of fire to become empowered.”

What is Rabbenu telling us here?

This is a fact, however upsetting, and the sooner we come to terms with it, the easier it will be to spot the ‘luminaries of fire’ before they burn us up with their bad advice, false judgment and heretical ideas that are really the antithesis of emuna and serving Hashem.

Rabbenu is also telling us that when the ‘famous’ people in the world are essentially God-less heretics, that’s when these ‘luminaries of fire’ will come to the fore, and that’s when all the pseudo-miracle workers etc will start pouring out of the cracks to confuse us even more.

It’s hard to think of a more secular bunch of ‘elites’ than we have in the world today, whether in Israel or elsewhere.

So that’s the situation we’re currently in.

But Rebbe Nachman is also telling us HOW we can spot who is a faker, and who isn’t:

A luminary of light does just that: they light you up. They exude spiritual light. They shine in the darkness – really literally as well as figuratively. 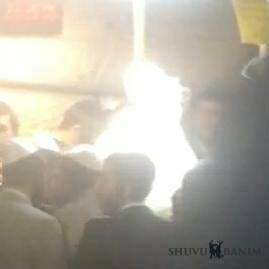 I remember a few years’ back one of the first times I went to see Rav Arush giving a shiur, his face was mamash shining, and I spent most of the night trying to figure out where the spotlight was…. There was no spotlight.

The same with Rav Berland. So many people describe meeting him in the same way: they were instantly struck by the light of holiness coming off him. It was enough to affect powerful spiritual changes in them without him even saying a word.

Luminaries of fire don’t have that light.

What they have instead is thunderous rhetoric, quick one-liners, heapings of blame, self-righteousness, arrogance, and often very quick tempers for anyone who dares to challenge them, take up too much of their time, or otherwise upset them in some way.

Luminaries of fire are scary people, once you peel off all the ‘fake nice’ that they go to great pains to cover it up with.  They roast you for not being good enough. They blast you for not being tznius enough, or having enough emuna (or simply, for being a flawed human being.)

They dole out judgment and advice with narrowed eyes and an obvious dislike (all carefully concealed). Also, whatever ‘spiritual uplift’ they do possess, it doesn’t illuminate so much as completely burn you out.

Your rapt attention, your obvious devotion and respect – it’s all just fuel for the insatiable fire of their own ego and self-interest.

Before I knew all this, I used to occasionally have phone calls with a ‘luminary of fire’ that would leave me feeling very weird afterwards, like I’d just been mugged somehow, but couldn’t for the life of me work out how, or who’d done it.

It was the luminary of fire, taking all of my respect for them to build a bigger bonfire for themselves. There was some light, too, but it was so hot and uncomfortable speaking to them I subconsciously decided to keep my distance.

It’s only when I overcame that reticence, to have the first ‘real’ conversation with them in all the time I’d been following them, that it became shockingly obvious that I was dealing with a faker, a luminary of fire, not a luminary of light.

Let’s end with this: Luminaries of light can hold their candle up even in your darkest hour, and give you a path out of despair.

The only thing they can do is ‘explode’ in some way – at you, for being such a useless, worthless, imperfect sinner. Fire is anger. Fire is intolerance. Fire is harsh words, and criticism and machloket.

May the luminaries of light be empowered again very soon, may God’s name be exalted and spoken about once again, and may we all have illumination instead of destruction in our lives.

Why a sense of purpose is so important

The other Jacob Franks

Find out what’s really in the Covid 19 shots – and why your government is hiding this information from you.

Doing it for God

Houston, we have a problem
Scroll to top