Just when you think the State of Israel couldn’t possibly sink any lower….you discover you are totally wrong about that.

Off the back of THIS post, that started to uncover how so many of our “retired generals” in Israel are basically licking the butts of ‘Jews for Jesus’, mamash, I decided to take a closer look at what some of these ‘Jews for Jesus’ organisations and people are actually doing in Israel.

I have to say, I got pretty miserable.

The first thing to tell you is that ‘Jews for Jesus’ figured out that was really bad branding, and that even the most secular Jew will baulk at that name.

So, they kind of ‘hide’ all the Yoshki stuff under the broader name of ‘messianics’, and then they also have a bunch of cute, fluffy-sounding projects in Israel that function as cover for their missionary activities.

If you go back to HERE, you’ll find a post on the old blog of Joel Chernoff from 2011, called ‘Messianic Jews and Aliyah!’

There, Chernoff is boasting how the State of Israel’s attitude to ‘Jews for Jesus’ is softening up, and how the country is letting more and more of these people flood in.

One of the comments to that blog post really caught my eye.

Here’s what it said: 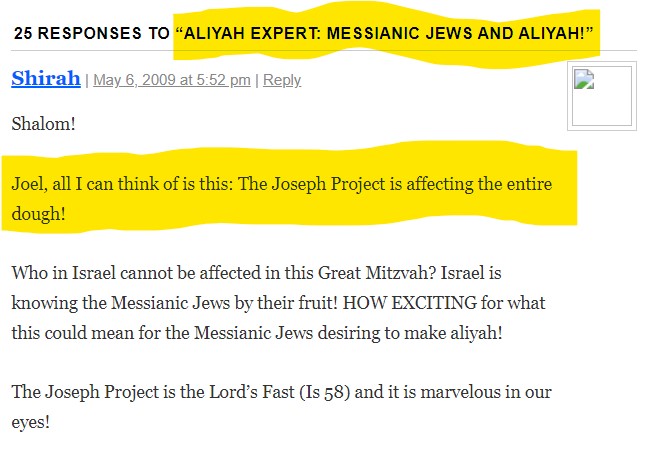 What is the ‘Joseph Project’, that is causing the State of Israel to change it’s attitude towards ‘Jews for Jesus’ missionaries in Israel?

And screenshotted below, you can find testimonies from a bunch of Jews, thanking the ‘Jews for Jesus’ Joseph Project missionaries for all their ‘help’: 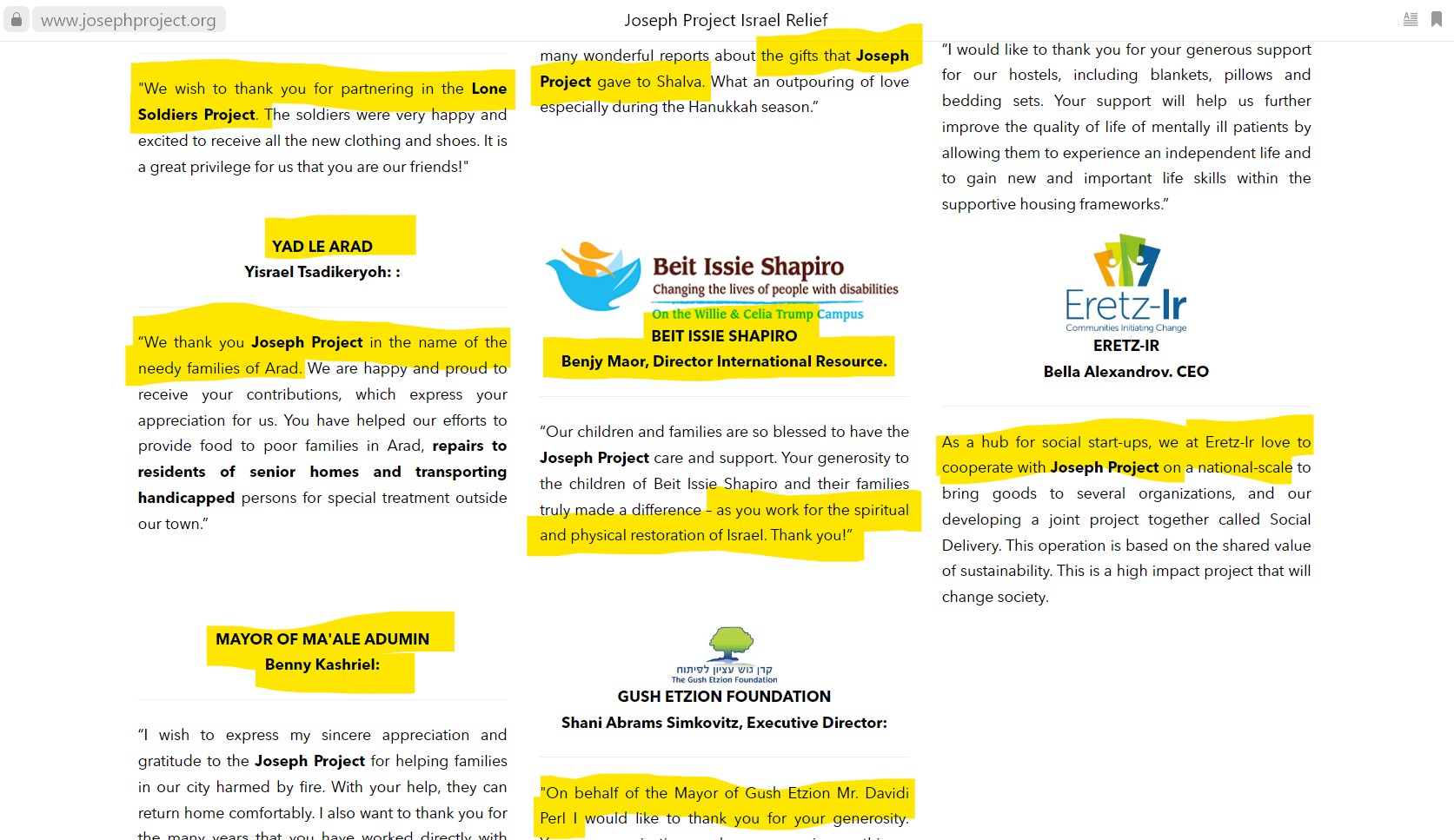 Maybe, you could argue that it’s not such a big deal for charity organisations like Shalva and Beit Issie Shapiro to receive money from ‘Jews for Jesus’.

After reading sickening comments from ‘Beit Issie Shapiro’ thanking these xtian missionaries for working for ‘spiritual and physical restoration of Israel’, I have to say I disagree.

But the fact that we have politicians and mayors sucking up to Jews for Jesus, mamash – is totally sickening and inappropriate.

And remember, we are dealing with XTIAN MISSIONARIES here, and as this video shows, they are also getting access to start indoctrinating our youth in the IDF, too.

Just listen to the ‘Shmuel’ from the Joseph Project, (above) talking about the project he’s leading with young adults who are post-army in Israel.

Listen to all the xtian-missionary phrases tumbling out of his mouth.

While the ‘anti-Torah’ Freemason-Frankists running this country attack any attempt to promote Judaism as ‘pushing religion’ on people, they are mamash inviting xtian missionaries into the country to promote xtianity any way they can.

Are you starting to see how this works?

In case you think ‘the Joseph Project’ and Joel Chernoff are unusual one-offs, the really bad news is that they aren’t.

(This site is also where I found information about that bunch of Jews for Jesus in Talpiot, and the ‘xtian’ background of the Megaleh Amukot, that I wrote about HERE.)

Most of its stories are behind a pay wall, but here’s the top snippet of a story that caught my eye, which in turn helped me to figure out just how widespread all these ‘Jews for Jesus’ organisations really in the State of Israel

Troubles began two years ago when a few Messianic Jewish leaders reported to the Hebrew-speaking Leadership Conference on what they saw as troubling theological positions being promoted by a ministry called Tikkun.

Based in Jerusalem, Tikkun has planted and oversees numerous local Hebrew and Russian speaking congregations in Israel. Their leadership remain highly respected by both Messianic Jews in Israel and Christians abroad. 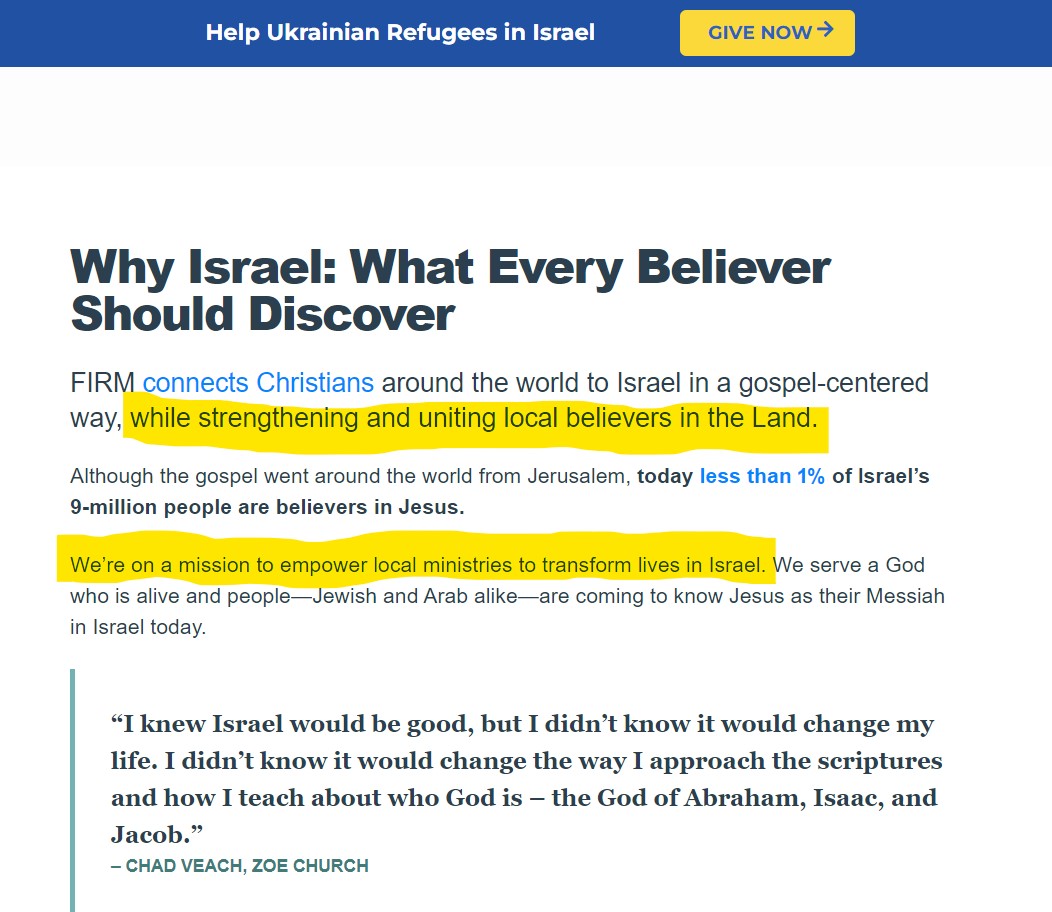 But more importantly, these sites also contain links to their Jews for Jesus ‘ministries’ and projects they have going on in the Holy Land.

‘Tikkun’ alone has 19 missionizing churches – specifically aimed at Jews – all over the country.

And don’t think they aren’t focussing in on the kids and young people – because they are.

On the Youth page of Tikkun, you find links to missionary organisations operating out of Jerusalem like NETIVAH, below.

Please, take the time to watch this. It’s two minutes long, but it encapsulates what’s really going on here – they are planting missionaries in schools and in the IDF, amongst many other places.

I am finding all this so disturbing, it’s literally giving me a headache.

Meanwhile, if we go back to Joel Chernoff’s ‘Messianic Jewish Alliance of America‘ – the people behind things like ‘The Joseph Project’ – we discover they also have a massive network of missionary churches and organisations across Israel, too.

This screenshot comes from HERE:

250 missionaries heading up ‘Jews for Jesus’ organisations in Israel!!!

And again, this is just the tip of a monstrous iceberg. And some of the heads of this snake are also pretty ‘frum’.

Here’s another screenshot, from a ‘Jews for Jesus’ organisation in Israel called Hashivenu: 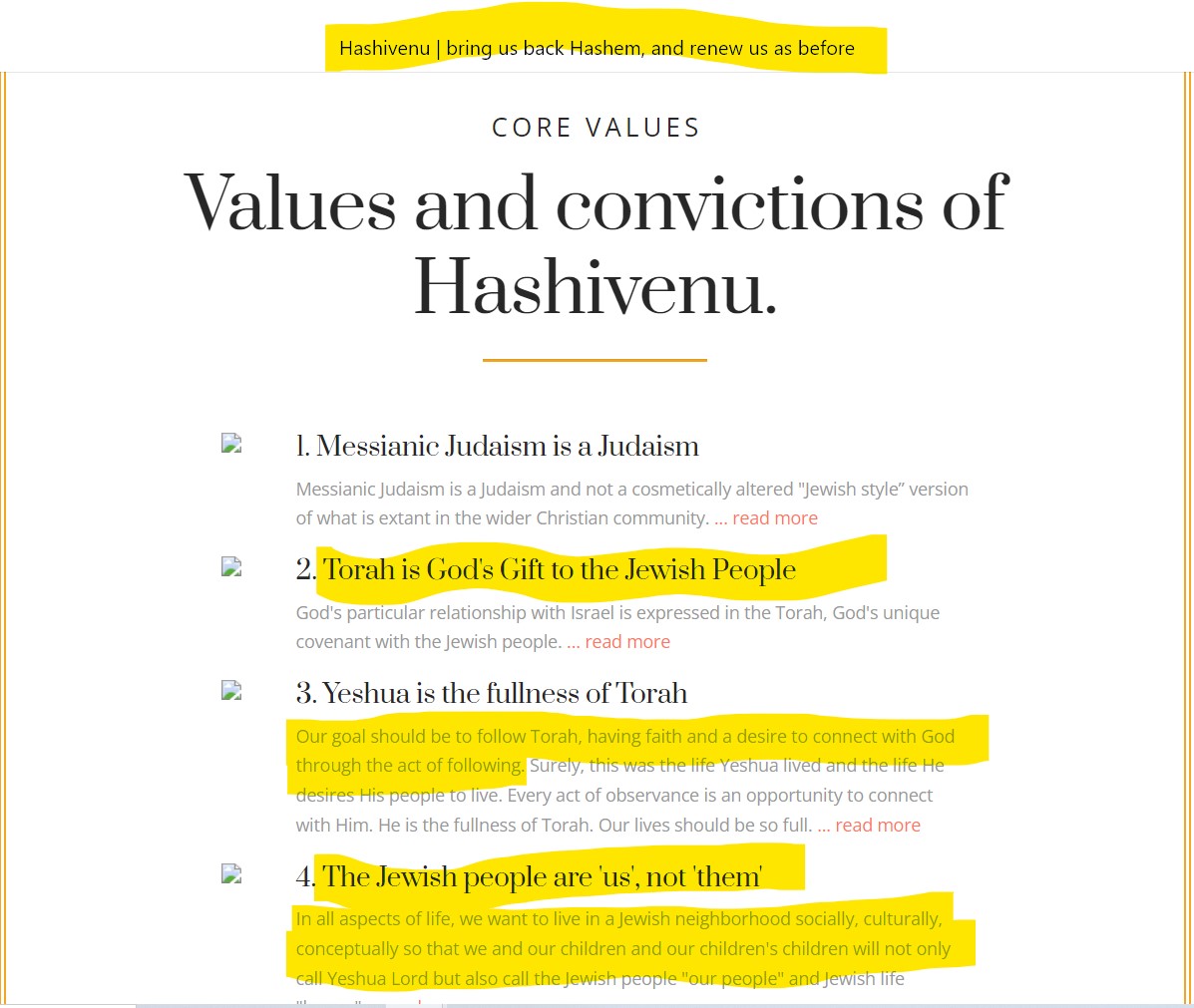 When I googled ‘Asher Intrater’ – leader of the Tikkun bunch of missionaries in Israel – I got to HERE.

It also has a ‘Ministry Directory’ of affiliated groups and organisations in Israel – again, just for Tikkun – which stretches on for 20 pages…. 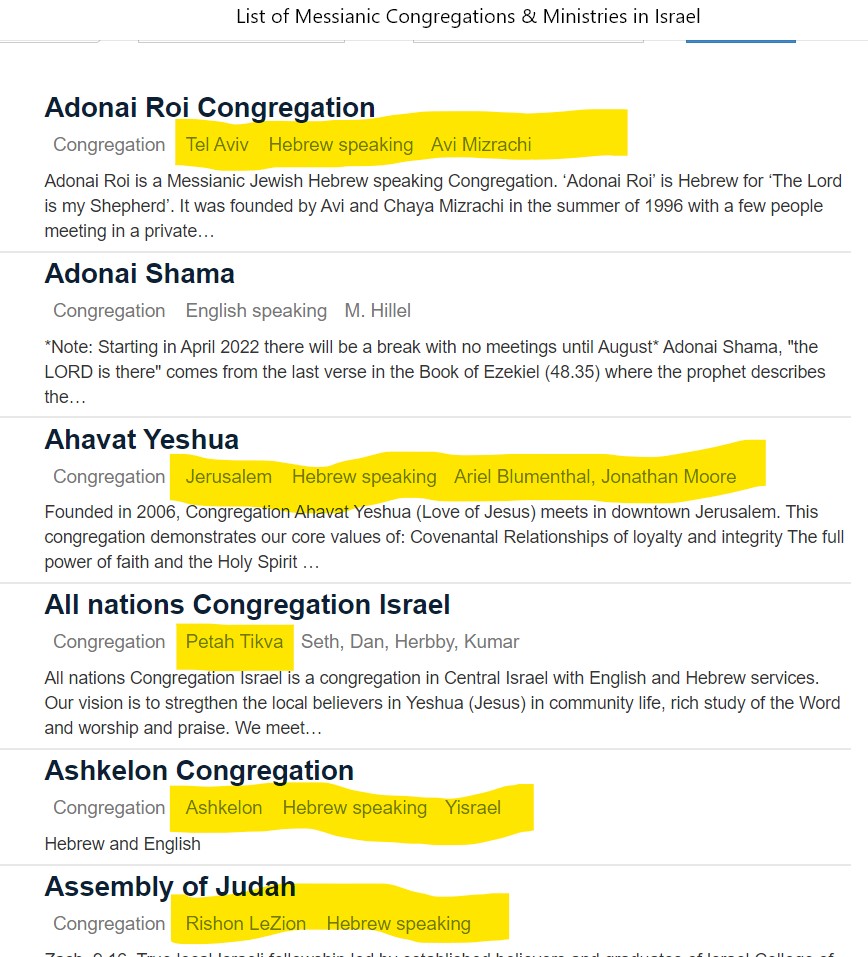 These people are everywhere.

Those missionaries pretending to be Jews in French Hill were literally just the very smallest tip of what is really going on in this country.

Watch this – future PM of Israel, Yair Lapid, being interviewed by his ‘good friend’ on the Evangelical ‘All Israel’ news:

(Listen from the 8th minute on, when he refers to evangelical xtians as his brothers and his sisters and starts mamash sucking up them. Have you ever heard him say something like this about Chareidi Jews?)

Lapid fought in the past against a law which would restrict missionary activity in Israel, despite the fact that his father, Tommy Lapid, supported such a law.

Yair Lapid claimed in 2015 that Moshe Gafni, who proposed the law, was “trying to fulfill my father’s last testament” but claimed that his father “had changed his mind” on the matter.

The law would have closed the Messianic community in which Lapid’s brother-in law and sister-in-law were members and it appears that this may have been the source of Lapid’s opposition to the law.

This guy is the second-in-command in the State of Israel, and is set to take over as PM very soon.

What that really means, is that the ‘mask’ that these people are Jews, and support a Jewish state, and respect Judaism, and our Torah is about to totally come off.

Because then, more and more of us will start to realise who we are really dealing with, and why the ‘State of Israel’ is probably the most openly anti-semitic, anti-Chareidi, and anti-Torah force in the world today.

(And probably, it’s been that way right from the beginning…)

If you can make it, please come.

I’ve been to many of these prayer gatherings, and the Rav only ever calls them when there are some big ‘judgments’ hanging over the Jewish people that need to be sweetened.

We are under attack, from without and within, like never before.

Xtians, Jews-for-Jesus ‘messianics’, Sabbateans, Freemason-Frankists – the list just keeps growing longer and longer, and honestly, Iran and home-grown terrorists are barely getting a look in at this point, as more and more of us are realising they are just the ‘puppets’ holding the guns and axes, while the real evil people pull their strings from behind the curtain.

Tonight is Netzach she b’Netzach, in the counting of the Omer.

Breslov teaching holds that this is the ‘day of Rabbenu’, Rebbe Nachman, when everything can be fixed, even past gilgulim.

So, it’s a very meaningful time to be holding an atzeret at the Kotel, with the Rav in attendance.

And boy, do we need some sweetening and fixing.