Most people don’t know this, but the State of Israel has been ‘experimenting’ on children with vaccines for years.

Today is meant to be the ‘big rollout’, God forbid, of more Covid shots for young children in Israel.

You already know that all this is based on lies and a total disregard for truth. HERE‘s Moshe Feiglin, calling it out for what it is:

Feiglin was also critical of Dr. Boaz Lev, who heads the Health Ministry team for combatting the coronavirus, for failing to address evidence of serious side effects.

“They got together a community of 75 doctors like him – each one of which either works for the Health Ministry or is head of a hospital or some kind of organization heavily financed by Pfizer. In other words, they picked a group of people, knowing exactly how they would vote, and got 73 out of 75 voting in favor.

“When I asked Dr. Lev about this, he said ‘we came to the conclusion there are no serious side effects [of the COVID shot].’ I asked him, have you heard of a little side effect called death? He said no, of course not.

So I told him, have you heard of the 16,000 deaths reported by the VAERS [Vaccine Adverse Effects Reporting System] in the US? He said no.

“This is the trial of our kids, and you haven’t heard about 16,000 cases of death reported in the official American system for reporting vaccine side effects? This is insane,” he said.

So many people have now been burned by serious ‘side effects’ from the Covid shots in Israel, that even hardcore ‘pro-vaxxers’ are losing trust in the government and doctors.

My friend was telling me about her neighbor, who happily got triple-jabbed with the Covid 19 shots – and then had a totally unexpected miscarriage at 12 weeks.

Since then, she’s lost her trust in doctors.

And something else happened, too.

She started to research the Health Ministry’s track record on ‘experimental vaccines’ – and quickly tripped over this shocking news:

Almost half a million babies were given a defective hepatitis B vaccine in Israel, between 2010-2015.

No-one knows this, but there is a class action suit going on against the State of Israel and Ministry of Health right now, because this ‘defective vaccine’ never recieved FDA approval.

And it lead to a massive surge in autism spectrum disorders, particularly amongst the boys who were injected with it.

And the Ministry of Health here continued to use this ‘defective vaccine’ for a whole five years, until parents finally started to figure out what was going on, and started to organise themselves legally.

Here’s a little more of what my friend sent me:

Apparently this has been in court for a few years already and there’s a gag order on everything.

Apparently eight year after that there was a really big jump on diagnosed autism cases, especially in boys.

====
The article is in Hebrew, but you can Google translate.
Here’s a screenshot of the headline, followed by a snippet. 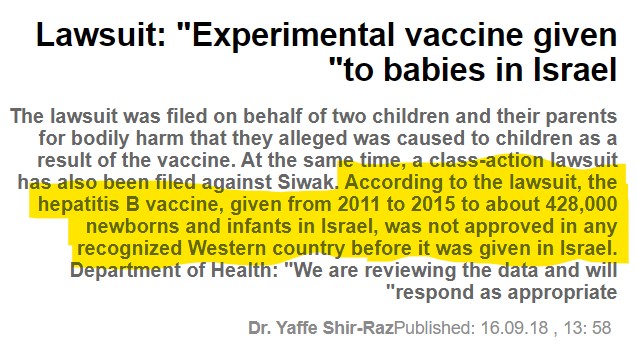 An experimental, flawed, dangerous and harmful vaccine is given to newborns and infants in Israel without informing the parents and without their informed consent.

This is according to a lawsuit filed last Wednesday by lawyer Dr. Ahava Tycho against the Ministry of Health and Siwak Company, the manufacturer of the Cybioak vaccine (Sci-B-Vac) – a hepatitis B vaccine made in Israel that was given from 2011 to 2015 to about 428 thousand newborns and infants in Israel.

It kind of speaks for itself, doesn’t it?

So, you can go ahead and trust the Ministry of Health on these ‘experimental, flawed, dangerous and harmful vaccines’ they are rolling out for young children today, if you want to.

After all the Yeminite Children sold to the US for secret radiation experiments and the MK Ultra project; and after the tens of thousands of Sephardi children who had their skulls ‘irradiated’ by the State of Israel as part of a contract with the US military during the ‘Ringworm Children’ scandal; and after the 428,000 newborns in Israel who were injected with an ‘experimental, flawed, dangerous and harmful’ hepatitis B vaccine – that didn’t have any FDA approval! – trusting Israel’s ‘Ministry of Health’ is the last thing I feel like doing.

Here’s a quote from the late, great, Barry Chamish, that sums up what the State of Israel did to the ‘Ringworm Children’:

In 1951, the director general of the Israeli Health Ministry, Dr. Chaim Sheba, flew to America and returned with seven x-ray machines, supplied to him by the American army.

They were to be used in a mass atomic experiment with an entire generation of Sephardi youths to be used as guinea pigs.

Every Sephardi child was to be given 35,000 times the maximum dose of x-rays through his head. For doing so, the American government paid the Israeli government 300 million Israeli liras a year. The entire Health budget was 60 million liras. The money paid by the Americans is equivalent to billions of dollars today.

To fool the parents of the victims, the children were taken away on “school trips” and their parents were later told the x-rays were a treatment for the scourge of scalpal ringworm.

6,000 of the children died shortly after their doses were given, while many of the rest developed cancers that killed thousands over time and are still killing them now. While living, the victims suffered from disorders such as epilepsy, amnesia, Alzheimer’s disease, chronic headaches and psychosis.

And here’s a video from 2019 (not shmirat eynayim friendly, in Hebrew) describing the experiences of some of the families whose newborns were injected with the experimental hepatitis B vaccine closer to our days, between 2011-2015:

The government is not our friend.

Big Pharma has no qualms about ‘experimenting’ on whoever they can – with impunity, because they paid our politicians to pass laws that say they can not be held liable for the ‘side effects’ of the ‘vaccines’ they inject into everyone, which are way more about experimenting on humans than they are about healing them.

You want to take a Covid shot yourself, that’s your decision, and you will have to deal with the consequences.

But before you do that to your children, FIRST, DO YOUR HOMEWORK.

May Hashem give us all clarity to discriminate between truth and lies, and the courage to follow the truth to wherever it leads us, even when that’s a very uncomfortable place to hang out in.

PS: As part of your due diligence, take a look at this interview with Spanish chemistry professor Dr Pablo Campra, talking about what he found in AstraZeneca, Pfizer, Janssen and Modern Covid 19 shots when he put them under the microscope.

It has pictures, lots of information, and English subtitles: