This morning, I had a conversation with a reader who asked me if I’d heard about ‘the 108 kids’?

I honestly had no idea what she was talking about.

So she told me to look up a Channel 13 show that appeared back in December 2019 – literally a few short weeks before ‘Covid 19’ kicked off big time in Israel – about 108 small chareidi kids who were repeatedly kidnapped from their kindergartens in the Sanhedria area – and horribly physically and sexually abused.

Honestly, it was kind of hard to believe my ears.

But after we finished speaking, I went looking for that information – and I found it.

If you speak Hebrew – or read Hebrew subtitles – you can watch the hour long documentary here:

And even though the subject material is totally horrifying, I want to ask you to still engage with it.

Because the people who did this to these children are still walking around freely.

THE JERUSALEM POLICE REFUSE TO INVESTIGATE THE MATTER, BECAUSE THEY CLAIM THERE IS NO SUCH PEDOPHILE RING OPERATING.

This translated snippet comes from HERE:

The police investigation lasted about three years, yielded nothing and the case was closed.

Investigators say they have not received cooperation from the ultra-Orthodox communities. A few people have been caught, but even today evidence continues to come in – and nothing has been done. Reports began to emerge in various care settings by children from different neighborhoods in Jerusalem, who do not know each other.

For those who don’t understand Hebrew, or who don’t have the time to watch and just want a ‘precis’, this is the basic story.

(You can also watch a six minute precis of the full program in Hebrew, HERE.)

Back in 2010, a major pedophile ring was busted in the Nachlaot area of Jerusalem, and people – fake ‘chareidi’ people – were arrested, and some went to prison.

You can read the basic background on what happened HERE, from the FailedMessiah blog, from December 2011, here’s a snippet:

Parents and a local rabbi say police bungled arrests and that resulted in setting at least one of the pedophiles, said to be the group’s ringleader, free. In a letter to the community, Rabbi Aaron Leibowitz says more than 100 neighborhood children were molested, almost all of them haredi…

Despite the fact that more than 100 children were known to have been abused in awful ways, three of the main suspects, including the purported ringleader, were never charged, and were quickly released back into the community.

Ha’aretz covered that HERE, and below is a translated snippet:

Shlomit Ben Yitzhak of the Jerusalem District Attorney’s Office filed charges in the case, and the parents learned that these were only filed against two of those involved, B. and P.

And although the indictments describe sodomy, gross molestation and rape, they relate to only five children.

Even the most sceptical of the investigation and welfare bodies admit that this is only a small proportion of assault cases – and the police alone have investigated more than 40 children.

Two other suspects are still being considered for charges, but they have been released from custody.

What disappointed the parents most, however, prompting them to think that the arrests did not ultimately herald the long-awaited correction, was S.’s release. S. – “the operator,” as one of the parents calls them -was released from custody a week later and returned to the neighborhood.

(It seems from other information, below, that this ‘S’ is actually a woman.)

The Jerusalem police, and others including the Failed Messiah blog, were very quick to point the finger of blame for this outcome at the ‘stoopid’ chareidi parents, and their associated counsellors and rabbis, who were trying to get these pedophiles stopped.

Another snippet from the Haaretz article:

A source close to the investigation said the reason for the huge gap between parents ‘ stories and hard evidence and their legal outcome was the actions of the parents themselves. The parents, he says, unintentionally disrupted the investigation.

Back in 2011, nearly all of us probably believed that there was no way the police in Israel would actively help to cover up the activities of such a vicious, disgusting pedophile ring operating out of Jerusalem.

A decade on…. things have really changed.

There were some strange ‘rumours’ around this Nachlaot pedophile ring, that was busted back in 2010.

Some of them swirled around an elderly female convert to Judaism, whom many children told their parents was closely connected to what had happened to them.

According to some rumors, S. is heavily involved in pedophilia. Residents in the neighborhood gathered testimonies from their children, who gave different versions but mostly reported that S. allegedly lured them to join her and took them to a basement in some building – it’s unclear where.

In the basement, the children are said to have found themselves naked and taking part in a Christian-themed ceremony, after which they were sexually assaulted by a number of paedophiles who were at the scene.

S. was beaten up shortly after these stories started to come out, and that mysterious ‘basement’ where many children said they’d been taken was never discovered.

Reading those accounts now, I’m struck by the ‘Christian-themed ceremony’, because after all the research into the devil-worshipping Freemason-Frankists and Knights Templars running the State of Israel from behind the scenes, these are details that start to seem far more credible now, than they did 10 years ago.

And it’s also very interesting that the suspected ‘ringleader’ appears to have been a female, formerly xtian convert.

Long story short, while the parents of Jerusalem were hopeful that the pedophile ring of Nachalaot was the end of that particular problem, it now seems it was really just the beginning.

Over the subsequent years, a number of therapists and counsellors who were were working with very traumatised children in certain neighborhoods of Jerusalem, especially Sanhedria, started to realise that they were hearing strange stories of sexual and physical abuse – from very different areas and children – that shared a lot in common.

Over the course of about 5-6 years, more and more professional therapists and counsellors, both within the chareidi world, and also within the secular world, started to piece together the horrifying information that at least 108 Jerusalem children had been kidnapped and abused by some sort of ‘organised ring’ located in Jerusalem.

If they admitted that something had even happened to the kid – a big IF!!! – the police claimed it was only ever isolated pedophiles, and not some organised gang with enough contacts to arrange to take kids out of their kindergartens, in the middle of the day, over many long months – without being noticed or caught.

If you understand Hebrew, please go and watch the documentary, particularly at the end, where the secular journalist confronts one of the Jerusalem police chiefs about what is going on, and is clearly extremely disturbed by what he is being told, about why the police closed the case without investigating it.

108 chareidi kids are kidnapped from their gans in broad daylight, assaulted in awful ways over a period of months and years – and the police in Jerusalem decide it’s all just a bunch of fairy tales that aren’t worth investigating seriously.

But that’s not all.

The police also decide that it’s the therapists who must be making up these awful stories, and filling the kids’ heads with them, in order to make more money for themselves.

The police are SO convinced of this theory, they even actually arrested one of the therapists who had been trying to help some of these children.

De facto, case closed – and another ‘victory’ for the police here.

Now, we have to ask ourselves:

Why would the police in Jerusalem apparently be so eager to run interference for what seems to be a massive, organised pedophile ring in Jerusalem, with links to xtian institutions and people, and / or links to satanic abuse?

What could possibly explain this?

Many of the 17 (!) therapists, shrinks and experts interviewed by Channel 13 journalist Chaim Rivlin for his expose believe that all the ‘xtian’ stuff was done deliberately by the pedophiles, simply to confuse their victims, and to make their stories sound so ‘unbelievable’.

Again, if you’d never heard about the devil-worshipping Frankists, if you never knew about the Frankist-Freemason connection to the Catholic church, if you had no clue that the devil-worshipping, child abusing Knights Templars were still a ‘thing’, and active behind the scenes in the State of Israel – it’s probably the conclusion most people would come to.

But at this stage….

All of these ‘weird details’ are just sounding way too familiar.

And the way these pedophiles are making such huge efforts to not only assault their small victims’ bodies, but also to try to poison their souls, too – this just sounds so similiar to the Frankist ‘reverse kabbalah’ satanic abuse I’ve been reading about the last two years.

The kids describe being ‘injected’ under their toenails or tongues, places where no-one can see a puncture mark and question it.

They describe being taking to ‘pools’ or baths of some sort, and having their heads held under water.

They describe being told that their abusers will kill them, if they eat kosher food, and force-feed them traif….

Here’s a screenshot of that last one: 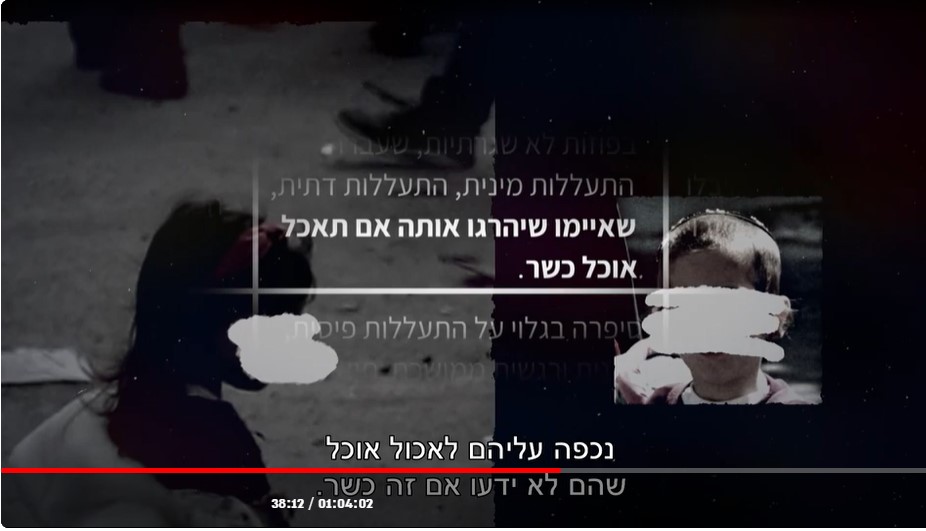 Houston, we have a problem.

It seems that there is a Frankist-Freemason satanic pedophile ring operating in Jerusalem – and the police is apparently not only not investigating what’s going on, they seem to be actively covering it up, and attacking the VICTIMS who dare to make a complaint about it.

I don’t think that stuff about small kids being abused in churches by ‘goyim’ is made up, or ‘confusion’.

And I think that’s the real reason all this is being covered up at the highest levels, in the Frankist-Freemason State of Israel.

The question is, what do we now do about all this?

Apart from praying that God uproots this awful evil, and destroys the people perpetrating it once and for all, I don’t know what else to tell you right now.