Jeremiah’s Prophecy of Messianic Times tells us to ‘ask and see if a male has ever given birth.’

In the last post, I touched on the reference to Jeremiah’s prophecy of Messianic times, 30-35, that apparently inspired the Armenian Church to start buying up large swathes of the Old City of Jerusalem, a few centuries ago.

Before we continue with the Vilna Gaon, and his ‘messianic vision’ stuff, I just wanted to connect a few more dots, about where we might be holding in the whole process of redemption.

On Shabbat, I looked up chapters 30-35 in my trusty Artscroll Tanach, and I’m copying out the first part of the text – which Artscroll flags as “A prophecy of Messianic times” in the margin – below:

This is the word that came to Jeremiah from Hashem, saying:

Thus said Hashem, God of Israel, saying: “Write down for yourself all these things that I am telling you into a book. For behold, days are coming – the word of Hashem – when I will return the captivity of my people Israel and Judah, said Hashem, and I will return them to the land that I gave their forefathers and they will possess it.

These are the things that Hashem spoke concerning Israel and concerning Judah:

For thus said Hashem: ‘A sound of terror have we heard; of fear, and not peace.’ Ask now and see if a male has ever given birth. Why do I see that every man puts his hand upon his loins like a woman in childbirth and all faces turn pallid?

Woe! For that day will be momentous, there is nothing like it. It will be a time of trouble for Yaakov, but he shall be saved from it. It shall be on that day – the word of Hashem, Master of Legions – that I will break the yoke [of the conqueror] from your neck and I will tear your straps, and foreigners will no longer enslave him. They will serve Hashem their God and David their king, whom I will establish over them.

But as for you, do not fear, My servant Yaakov, the word of Hashem, and do not be afraid Israel, for behold: I am saving you from distant places and your descendants from the land of their captivity, and Yaakov will return and be at peace and tranquil, and none will make afraid.

For I am with you – the word of Hashem – to save you. For I will bring annihilation upon all the nations among whom I have dispersed you, but upon you I will not bring annihilation. I will chastise you with justice, but I will never eliminate you completely.

Jeremiah continues on to say:

Then, in election mode, God says to Jeremiah that:

“His leader will be from his midst and his ruler will emerge from within him….You will be a people unto Me, and I will be a God unto you.”

I.e. we’re approaching that time when our ‘leader’ is not going to be a corrupt, Westernised, pseudo-goy puppet, but a real Jewish leader, who will return the nation to serving Hashem.

And Chapter 30 then ends with this:

Behold, the storm of Hashem: A rage shall go forth, a tempest that will seek rest; it will rest upon the head of the wicked. Hashem’s burning wrath will not recede until He has accomplished it, and until He has upheld the plans of His heart. In the end of days you will be able to understand it.

At that time – the word of Hashem – I will be a God for all the families of Israel, and they will be a people to me.

So, here’s a few thoughts on the above. Before Shabbat, I checked in with Sky News, and this headline grabbed my eye:

One of the few transgender men in the UK to have given birth has said misinformation from the medical profession is “de facto sterilisation”.

Freddy McConnell, who made a documentary film about his experience, spoke to Sky News about what it was like to be a pregnant man and to give birth….

Freddy McConnell, who was legally registered as male at the time of the birth, does not want to be recorded as the child’s mother.

(I know, I know, believe me I know. May Moshiach come and rescue us very soon….)

But in the meantime, it appears to peg us at a very significant time in Jeremiah’s prophecy for the end of days, vis:

Ask now and see if a male has ever given birth. – CHECK!

And now what comes next?

Woe! For that day will be momentous, there is nothing like it. It will be a time of trouble for Yaakov, but he shall be saved from it. It shall be on that day – the word of Hashem, Master of Legions – that I will break the yoke [of the conqueror] from your neck and I will tear your straps, and foreigners will no longer enslave him. They will serve Hashem their God and David their king, whom I will establish over them.

I had one more thought about this as I was typing it up.

Over on the ravberland.com site, the story came out that some of the Rav’s followers in Miami got together to pay a pidyon, to have the Rav ‘move’ the Category 5 Hurricane Dorian away from the State of Florida. 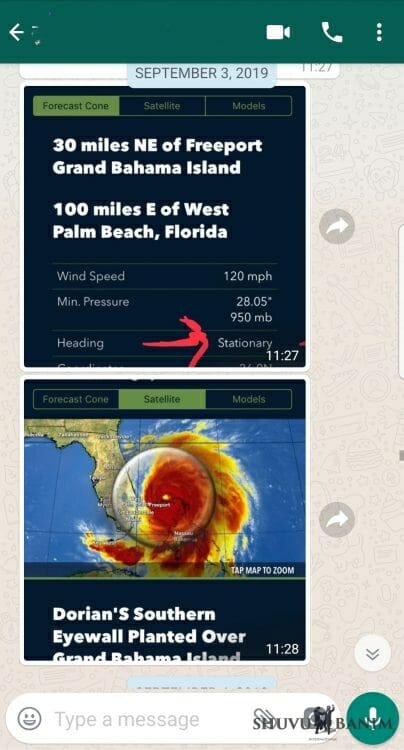 (You can read the full story HERE, replete with recordings and WhatsApp messages, where the Rav is clearly heard saying that either he’ll stop Hurricane Dorian over the Caribbean, or it will track up the coast 100 km out to sea. In the end, Dorian did both of these things.)

Dorian basically stayed stationary over the Bahamas for the best part of two days, destroying between 90-100% of the infrastructure on Abaco Island, and an estimated 70% of Grand Bahama Island’s infrastructure, too. The death toll is expected to jump into the thousands, when they finally get around to cleaning up over there.

I don’t know about you, but this was a little disturbing to me. Why was targeting the Bahamas for destruction more ‘moral’ than having a hurricane slam into Disney World? So, I went to do some research – and whaddya know?

The Bahamas is a very big, very important stop on the trafficking route into North America. Guns, drugs and people are all being smuggled in and out of America all the time via that route, which if you continue on for a couple hundred more miles, also leads out to the Virgin Islands and the infamous ‘Lolita Island’.

Now, it all starts to make sense:

Behold, the storm of Hashem: A rage shall go forth, a tempest that will seek rest; it will rest upon the head of the wicked. Hashem’s burning wrath will not recede until He has accomplished it…

It sounds like a contradiction in terms, to have a ‘tempest that will seek rest’ – that’s not usually what happens with storms and massive hurricanes. They just keep moving until they blow themselves out.

Dorian was very unusual, in that it maintained Category 5 status across 2-3 days, while staying stationary – ‘seeking rest’ – on the Bahamas, until the whole place was effectively totally flattened and rendered uninhabitable for a good long while.

What the ‘it’ is, is open to debate. But it seems at least plausible that Hurricane Dorian may just have permanently disrupted a major trafficking route for the forces of evil. From where I’m sitting, it looks like:

Jeremiah’s ‘end of days’ prophecy seems to be jumping a little closer to home.

And we still have the elections in Israel in two days’ time, that could also be a significant turning point.

Bushfires and volcanoes in Australia

Am Yisrael, Don't be scared!

The last test before Moshiach
1 reply

Download the explosive new investigative report that the government doesn’t want you to read:

The Vilna Gaon and Moshiach