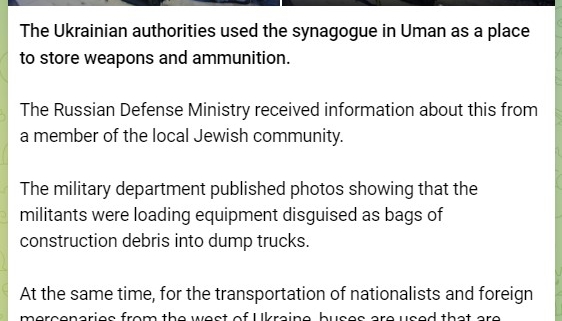 I was planning to take today off, but all night, I was dreaming the words ‘synagogue in Uman’.

That was a reference to this: 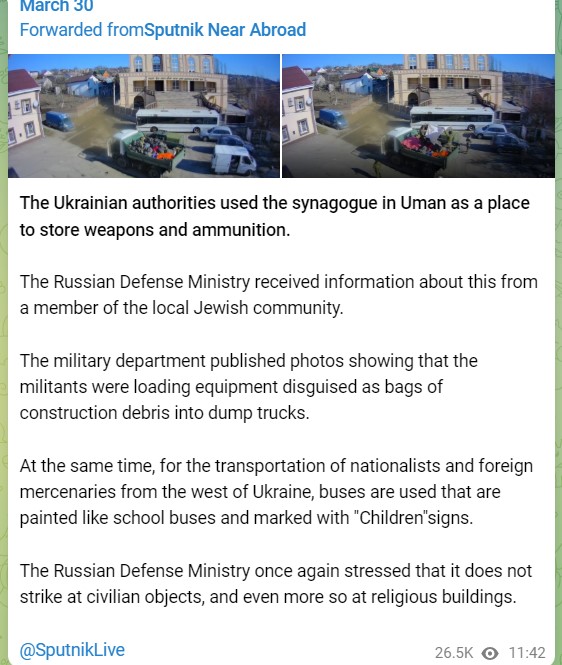 I saw this yesterday, when a contact asked for some sources of information about human rights abuses being carried in Ukraine – by the Ukrainians.

So I started sending her some links, and that’s when I came across the first mention of ‘Uman’ I’ve seen in a long time, in relation to what is going on there right now.

I’ve been finding it strange that after the first week, there has been almost no information at all coming out about what is going on with the Jewish community in Uman. I have no idea if people are still there, if everyone left, if they are OK.

The internet is still working there, other people are still streaming content out of Ukraine every day – even content that is ‘anti’ the Ukrainian neo-Nazis who currently in power there – so the silence from the Jewish community in Uman is very strange.

Unless they all left?

If you do know more, please leave links in the comments section.

Here’s the thing: I have never seen a synagogue like this in Uman.

Me and my husband were trying to figure out where this would be.

We were last there in November, and there was nothing like this around area of the Tzion of Rebbe Nachman at that point – which is where you’d expect a synagogue to be.

And there’s no space in that area for a structure like this.

And it’s weird, that anyone would build a synagogue outside of the Jewish area of Uman – especially one that looks so ‘unprotected’ and open.

This is that picture of the synagogue blown up:

Try as I might, I can’t make out the words on it, apparently in Hebrew.

And we can see from this that the top story is just windows.

I was thinking maybe it was the old Kloyz in Uman, which you can read about more HERE.

This screenshot of the Old Kloyz comes from that site: 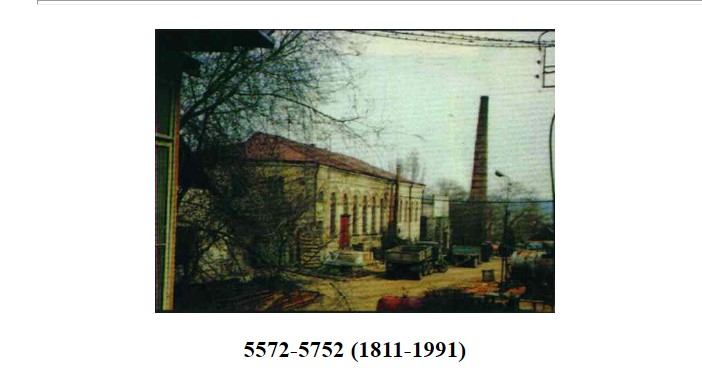 So, this ‘synagogue in Uman’ is stumping me.

But it’s becoming ‘an issue’ in the war – and that’s also worrying me, that the Russians are putting out reports about ‘Jews in Uman’ apparently snitching on where the neo-Nazis are storing their weapons, because those animals are violently murdering people in places like Mariupol and Kharkov for much lesser ‘crimes’. 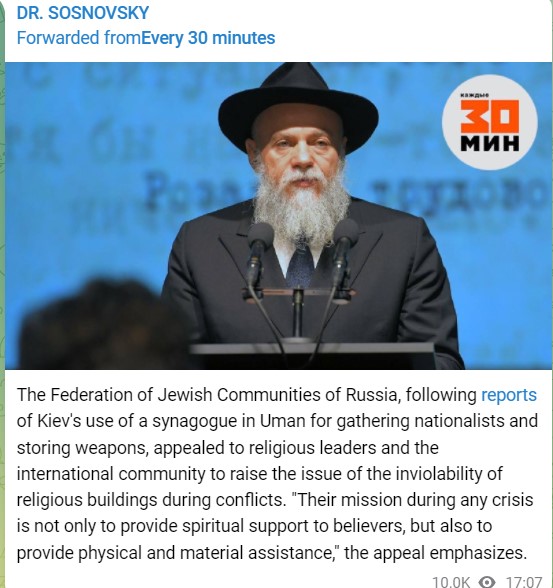 If anyone can shed any more light on this ‘synagogue in Uman’, or what is actually happening to the Jewish community in Uman, I’d be grateful.

Thanks to reader (and good friend!) C, for the following links:

Haaretz wrote an article about it:
https://www.haaretz.com/world-news/europe/.premium-war-in-ukraine-uman-jews-deny-russian-claim-synagogue-used-to-store-arms-1.10708518

And somebody toured the shul to show that it’s empty:

Natan Ben-Nun of the Rabbi Nachman Foundation in Uman showing the inside of the main hall of the synagogue that Russia accused Ukrainian forces of using as an arms depot.

“It’s empty,” he said. “There are no guns.” pic.twitter.com/knczhFzVvS

[Chabad Ukrainian Chief Rabbi Moshe] Azman also showed up to confirm nothing is in the shul:

(When I try to link to that tweet, it’s just bringing up the tweet above….so here is a screenshot:)

So, I read this and I started to wonder if it’s a Chabad shul in Uman?

And maybe that’s why I’ve never heard of it?

Then, C. sent me some more information:

I think this is the one, Kirya Neemana synagogue:

Where it’s circled in red, that’s Rebbe Nachman’s tomb, and Pushkina Street – the heart of all the Breslov action in Uman.

Where it’s circled in yellow, is the ‘Kirya Ne’emana’ that I’ve never heard of before today.
It might not look like it, but even though it’s relatively close to the Tzion, in terms of the physical distane, it’s a million miles away.
Most of the Jewish visitors to Uman just don’t go to the places far beyond Pushkina unless in a taxi, because it just doesn’t feel so safe to walk around there, honestly, as a visible Jew.
So now, I’m still clicking around trying to find out who built that shul in the middle of nowhere, and who “Natan Ben-Nun of the Rabbi Nachman Foundation in Uman” actually is.
Nothing seems to be coming back to me in English or Hebrew for the ‘Rabbi Nachman Foundation in Uman’, or  – but maybe you’ll have better luck.
====
Back on the Google Maps page, there are a bunch of photos of the shul being constructed, and also THIS one, screenshotted below:

The central figure in this picture is R’ Yaakov Meir Shechter, head of the Breslov shul in Meah Shearim which was home to the psychos (related to the extended Schneerson family in Israel) who have been persecuting Rav Berland for at least the last 30 years.
It seems that this shul is connected to the Meah Shearim Breslov Shul (but I’m happy to stand corrected, as more information turns up.)
====

Meanwhile, there are some strange ‘reviews’ of this shul, including this: 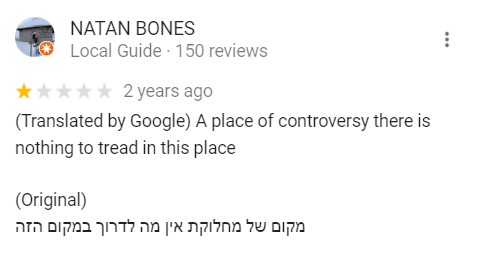 And back on the Twitter feed of Ha’aretz journalist Sam Sokol (who is still telling everyone, repeatedly, that THERE ARE NO NEO-NAZIS IN UKRAINE!!!!) – I found the original video from Russia’s military saying that there are weapons being stored there: 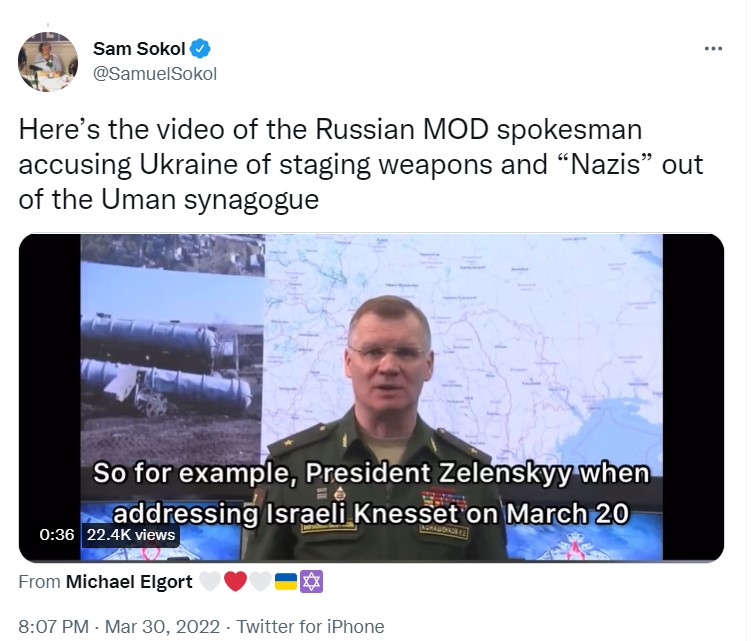 In case you forgot, there’s a whole bunch of video and first-hand evidence showing that:

Here’s a few Telegram channels you can check out for yourself, to get ‘the other side of the story’, that is totally missing from articles by Sam Sokol, and other journalists:

(These aren’t hyperlinked, so cut and paste.)

A couple of screenshots:

First-hand witness reports of people who fled Mariupol nearly all seem to be saying the same thing:

Maybe THAT’s the reason none of the Western media seem to be running a lot of interviews with the people fleeing Mariupol.

In the comments, Ruth just put a link to another Telegram channel that seems to be updating info from some of the Jews still in Uman.

From what I’m reading there, it sounds like life is going on pretty much as normal in Uman for the Jewish community….

Which kind of seems incredible.

But long may it continue, and long may they stay safe, under the wing of Rabbenu.

B’kitzur…. all nice and confusing, still.

Let me just leave you with one last screenshot from this morning, from Gonzalo Lira’s Telegram channel HERE: 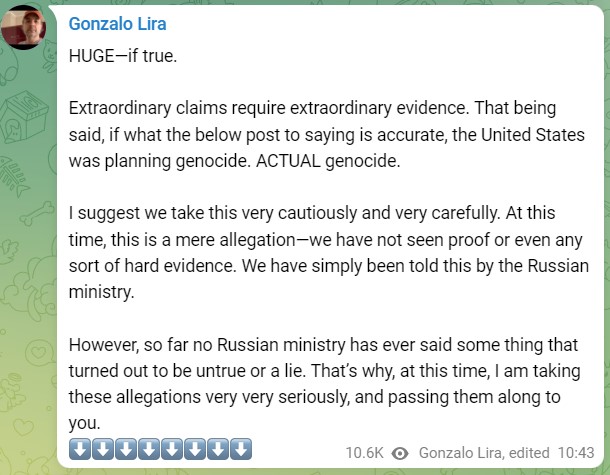 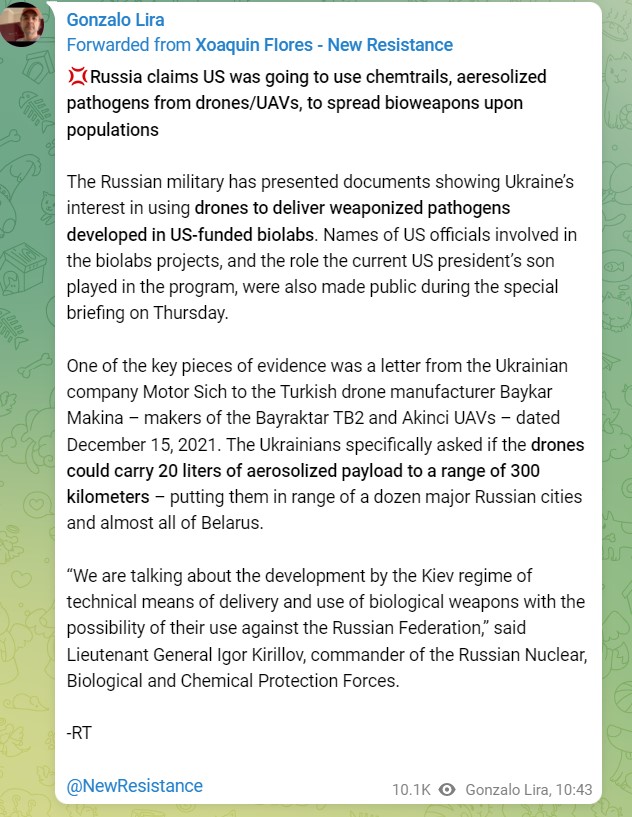 Before Covid 19, this would have seemed fantastic.

I went back to that blown-up picture of the shul, that claims to be showing weapons stored in the basement.

As Hava said in the comments, it looks like a ‘fake’ picture.

That’s partially because the upper story isn’t complete, there are still foundation wires sticking out the concrete, and the windows seem to be ‘hanging in space’. But we know it’s not an unfinished building, as we’ve seen people now walking around that structure, and it doesn’t look the same today.

So – these shots that the Russians are claiming show weapons being stored and moved from this shul seem to be from a while ago.

I’m just trying to piece all this together still, but that seems to be the facts.

If you go to THIS Telegram link, you’ll find a video where Al Jazeera is describing the stellar work of the Red Cross in Ukraine…. except when the ambulance pulled up next to them, it disgorged a whole bunch of Ukrainian soldiers, who have been using ambulances to transport themselves, much like our own Palestinian terrorists do. 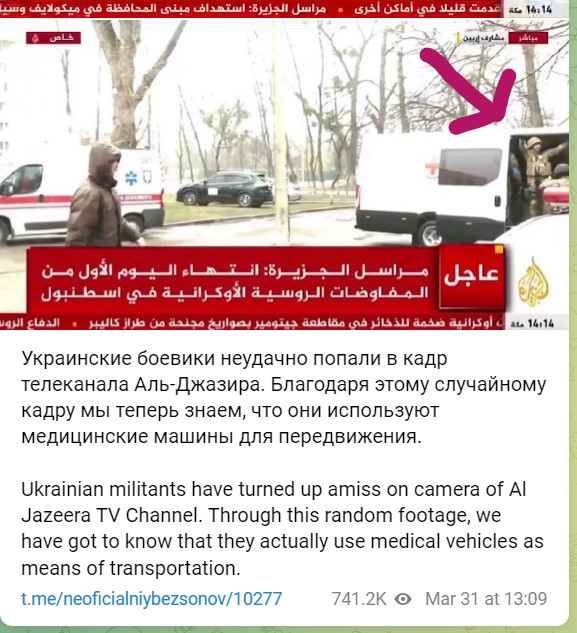 That’ll do for now, or Shabbat just won’t get cooked. 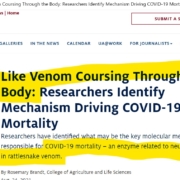 Rav Berland on the war in Ukraine - Part 3 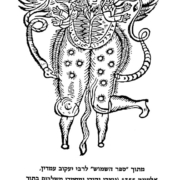 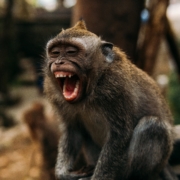 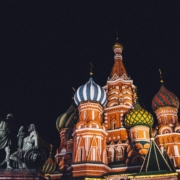 Rav Berland on the war in Ukraine – Part 3

“Send us down in a generation of shmad”
Scroll to top